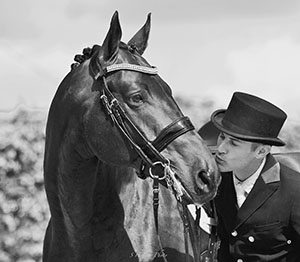 It all started one sunny afternoon in Florida when my father came home with a skinny chestnut pony named Princess in the back of his green Ford pick-up truck. Little did my parents or I know that Princess would be the herald to a life of loving horses and a professional riding career.

From elementary school through most of junior high, my riding interests involved just about anything with four legs. I began taking weekly riding lessons at Ridge Point Stables, a hunter/jumper barn, where I learned everything from mucking stalls to two-point position. After a few years leasing various horses such as Artex, Ashley, and Polcat, my begging paid off and I got my first horse Duchess, a Morgan/Thoroughbred mare with an attitude. Duchess was my first official pupil! Words can’t begin to describe all that she taught me and for that I am grateful.

My dressage education officially began my sophomore year in high school at Knoll Farm. I was selected to spend a summer as a working student/groom for Anne and David Gribbons in Long Island, NY. This marks my earliest introduction to riding ‘real’ classical dressage. I will never forget the powerful feeling of riding my first trained grand prix horse; a little appaloosa stallion named Freckles. Other horses that were my teachers included Witchcraft and Three Crowns. Many thanks to Karen R (a trainer at the school at the time), for her patience and teaching me the value of honoring and listening to your horse.

Upon my return from Knoll Farm, I leased a Dutch gelding appropriately named “Dutch”. He was trained to PSG and I began training with Nancy Harris of Ocala, FL. It was Nancy that taught me to ride with an independent seat and leg. She would say “the leg and seat create the frame” those words still play in my head today. Our goal was to compete in the FEI young rider finals of which we almost achieved, but were unable to do to unfortunate circumstances. Dutch was the perfect gentleman, always up for whatever he was asked of. 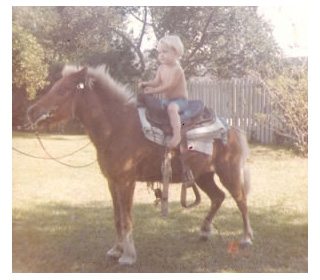 Before high school graduation, I applied to Hilltop Farm in Colora, MD for a summer working student position and moved the day after I received my diploma. Hilltop Farm would be my foremost experience at a first-class training/breeding facility that you could literally eat off the barn isle floors. I became educated on stallions, the breeding business, introduced to embryo transfer and artificial insemination, and the training of young horses. Many thanks to Scott Hassler and the staff at Hilltop for an action packed and unforgettable summer.

I returned to Orlando, FL to begin college at Valencia College. I spent the next 2 years working at Avant Blume Farm under the trainer David Lousille as well as commuting to Ocala to continue training with Nancy Harris. I was fortunate to have David’s eye everyday while training and I thank him for all that he taught me about the industry and how to run a successful training business.

I moved to San Francisco, CA in the summer of 1999. I enrolled in business school at SFSU and began working as an assistant trainer and exercise rider at the Portola Valley Training Center. I rode just about everything (hunters, jumpers, 3-day, dressage horses, you name it) during my time there. Riding up to 15+ horses a day became my regular routine.  The opportunity to ride so many different horses daily taught me not only how to be effective and efficient, but that all horses truly require something differen t. I also took my first training trip to Holland where I got a taste for the sport like I had never experienced! Within the next year, I started my own training business and continued to train horses and clients until I completed my business degree in 2002.

I headed out into the corporate world when I finished school and started working a job other than horses. I was lucky enough to lease a grand prix horse named Wonderful during this time and rode in the morning before heading into the office. This however would be short lived as my drive to be a competitive rider coupled with a series of changes in my life led me in a new southward direction. My best friend had just recently moved to Los Angeles so I figured I would do the same.

Shortly after arriving in Los Angeles in 2003, I connected with a few dressage riders in the area and quickly began building my network. I was open to riding or working with anyone who would give me the opportunity. In addition to training, I used my business degree and started my own boutique sales business Birchall Equestrian and Co. The time that I spent in Holland got me excited about the sales side of the horse business so I leased a small barn with a dressage arena and began traveling to Europe to purchase dressage horses for resale. Success came quickly as one of my first clients purchased two of my horses and offered me a sponsorship that would change my life.

In April of 2004 my sponsorship began at Alcole Equestrian owned by Amy Brandt. For the next 6 years I would ride, train, and compete the best dressage horses (Lincoln, Sjeng, Domino, MacGyver, and Sunshine) in my career up to this point. I began training frequently with Guenter Siedel, Nick Wagman, and Marie Meyers to name a few.  I traveled to Europe regularly to purchase horses, go to auctions and competitions as well as to train. I showed in my first CDI, earned my USDF bronze and silver medal, and competed in the grand prix. I also continued to build a training clientele, teach clinics, and sell my own horses. I am forever grateful to the Brandt family for all of their incredible generosity and support during my time with them at Alcole!

A new horse would enter my life in October of 2010. A fiery bay Holsteiner mare named Untouchable Secret owned by Kathleen and Larry Paul.  Secret’s potential to become a top dressage horse quickly became apparent and with the Paul’s permission at the beginning of 2011, I decided it would be best for me to move to Rancho Santa Fe to gain closer access to competitions and a more extensive network of higher level trainers. It was a difficult decision to leave Los Angeles and all of my wonderful clients, but I felt it was what I needed to do in order to advance my career.  Thank you to all of my supportive clients!